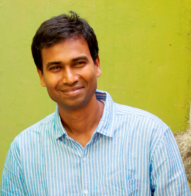 Ariv’s work is primarily associated with providing support to strategic sector where he contributes to design, validation and development of aircraft configurations by generating experimental aerodynamic data on scaled models and components of aircraft configuration.  His primary research interest lies in low speed/low Reynolds number flows with a major focus on separated flows & their control, vortex dominated flows, fluid-structure interaction and configuration aerodynamics. Some of the problems that he is pursuing currently are related to fixed wing micro air vehicles (MAVs).

The diminutive size of a micro air vehicle (MAV) imposes several constraints in the design process. The end result is a trade-off between these constraints at the expense of aerodynamic efficiency. Further, because of its low inertia, the vehicle’s stability is susceptible to the highly turbulent environment it flies.  The flight control system plays a major role in sensing these destabilizing disturbances and engages in corrective measures to keep the vehicle in its trajectory. Ariv’s research efforts are aimed at improving the flight envelop by enhancing the stall behaviour as well as passively suppress these turbulent fluctuations caused by the chaotic environment.

Although, he was initially looking at convention flow control devices, in the recent years, his focus has shifted to bioinspiration & biomimetics. Currently, he is working on bioinspired passive flow control concepts which imitate the alula and upper surface covert feathers of birds. While he already published his findings on the impressive improvements of this emulation on the stall behaviour of low-aspect-ratio (LAR) wings, his recent experimental investigation also suggests that the control device can suppress turbulent fluctuations.

Moreover, intrigued by the interaction between propeller slipstream and leading edge vortex (LEV) on LAR wings, he is also, in parallel, pursuing a flow diagnostic investigation trying to understand wing geometrical parameter’s role in this interaction.

Furthermore, on the high speed regime, he is interested in nozzle flows and currently working on the performance enhancements of dual bell nozzles.