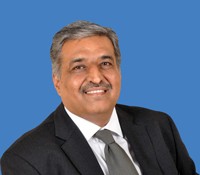 The year 2019 was a special year for CSIR-National Aerospace Laboratories as it marked glorious 60 years of its foundation. As we start a new year again, we carry the lessons of the past with us and look confidently forward, as we always do. Before we greet the year of 2020, I would like all of us to recall our achievements in the year 2019, of which many will contribute to sustained growth of our esteemed institution.

During 2019, the most notable achievement of the laboratory with the new upgraded version of SARAS PT1N, the indigenous transport aircraft developed by National Aerospace Laboratory, "successfully" performed 24 flights demonstrated flying performance at Aero India 2019.  Further, I am happy to share that CSIR-NAL obtained Production Organisation approval under CAR-21 Subpart-F from the DGCA for improvements on Hansa-3 VT-HOH. Features such as glass cockpit & LED – type lights were implemented on the aircraft. For the first time in history of Hansa aircraft programme, DG, CSIR  had air experience in the Hansa, a CSIR indigenous aircraft. Significant efforts were made towards the development of Hansa- New Generation (NG) aircraft with the improvements such as, glass cockpit, advanced fuel efficient Rotax 912iSc engine with better performance (increased range & endurance), optimized airframe, steerable nose wheel, electrically operated flaps, IFR compliance, improved ingress-egress, better interiors/ergonomics and external finish. The aircraft took part in the in the flying display during Aero India 2019 and the first prototype is expected to fly by second quarter of 2020.

It was indeed a successful year for CSIR-NAL as we have received the approval for the development & certification of SARAS MKII – 19 seat LTA project. Substantial progress was made in the design of SARAS Mk-2, 19 seat aircraft configuration design, shortfalls in SARAS prototypes (PT1N/PT2) were identified as they have emerged during flight testing activity. SARAS Mk2 will feature glass cockpit, pressurised cabin, operation from ill equipped air field etc., SARAS Mk2 will be equipped with a full digital cockpit with advanced avionics. The first prototype(s) will fly with commercial equipment and indigenous equipment will developed in parallel. Also, the airplane will be equipped with a robust landing gear for operation from undeveloped airstrips and state of the art ECS and CPCS.

In addition to furthering the indigenous development for strategic sector, NAL’s significant contributions to major national programs in this sector have enabled the strategic sector to achieve self-reliance and considerable saving to foreign exchange in terms of import of high-end technologies and services. NAL has immensely contributed to the fighter aircraft carriage & handling, weapon integration and stores clearance studies. During 2019, Indian Air Force (IAF), for which store separation simulations were carried out and release/jettison envelopes suggested, proposed four new configurations. Two 65 hp prototype engines were delivered to the sponsor for the flight trails after completing the necessary ground testing and ATP testing in coordination with RCMA (Engines) and AQA (Engines). CSIR-NAL continued its support to the ADA’s LCA-Tejas Programme. Advanced Composites Division (ACD) - NAL continued to make contributions in the areas of design, fabrication and R&D of composite structures. NAL received purchase order for the supply 20 sets of composite components/assemblies (consisting 13 parts/set) &  25 types of tools and for SP 21- 40 aircrafts. All requisite approvals have been obtained from CSIR Head Quarters to execute this order with the support of our production partner, M/s Tata Advanced Materials Limited (TAML), Bengaluru. Failure analysis and accident investigation is a continuing activity of the Materials Science Division of CSIR-NAL for the past four and half decades. During the year 2018-19, 32 investigations involving incidents/accidents of aircraft, helicopters and Remotely Piloted Aircraft (RPA) were referred to the laboratory for investigation by the defence organizations. In most of these investigations, the primary cause(s) of failures could be identified and after each investigation, recommendations were suggested for prevention of similar incidents/accidents in future.

Under Fast-Track Translational (FTT) project, design, development & certification of FPGA based IP core 818 as a part of the international standard RTCA DO-254 for avionics video and data widely used in Civil and Defence advanced display systems was obtained CEMILAC certification. The development of mini UAV configured for two major applications has been successfully completed in 2019. While Surveillance is the primary objective of the project, however based on request from the users, the UAV is also configured for geo-spatial mapping applications. Efforts are on for the commercialization of the product. Under CSIR’s FTT project on ‘Drone based Electromagnetic And Magnetic System (DREAM)’  NAL team has designed and developed the first version of the vehicle with 5 kg payload undergone initial flight tests.

CSIR-NAL’s National Trisonic Aerodynamic Facility has completed 1089 blowdowns in the 1.2m and 434 blowdowns in the 0.6m wind tunnels during the year 2018-19. The major users of the facility were DRDO, ISRO and CSIR-NAL. For DRDL, wind tunnel tests were conducted for aerodynamic characterisation on typical missile and rocket configurations with and without control surface deflections. The Indian Space Programme has been ably supported by the CSIR-NAL Acoustic Test Facility over the last three decades. During the year, ATF has completed the acoustic qualification of the L40 Strapon Nosecone decks of all the four liquid strap-on of the GSLV MKII vehicle for the F11 mission. PSLV 2/3 L+U inter-stage of C43 mission also underwent acoustic tests at ATF for qualification of hardware modifications as well as the addition of hardware.

CSIR-NAL has made significant contributions in the area of special materials. The achievements in the year are truly noteworthy. In the reporting year, CSIR-NAL has signed a non-exclusive license agreement with M/s IPA Pvt. Limited on for processing of PZT powders and their products on commercial scale for accelerometer applications The ToT of NiTi Shape Memory Alloys to MIDHANI for production of engineering products such as rods, plates, wires and strips has been completed during the previous year and  MIDHANI. Has taken-up regular production for supply of various engineering products to customers on order.  Statistics show that in terms of cost, about 70% of the NiTi SMA market pertains to applications for the healthcare sector. In this respect, the collaborative R&D work with Sree Chitra Tirunal Institute for Medical Sciences and Technology (SCTIMST), Trivandrum  for development of ‘Aortic Stent grafts’ and ‘Aerials Septal Defect occuluder’ is progressing well and is expected to yield good results in the coming year.

In line with the government’s emphasis on translating home grown technologies for societal benefits, CSIR-NAL’s performance in this area has been commendable. I am happy to inform that during the year NAL developed desktop autoclave to meet the expectations of academia and research institutions in establishing an affordable and low energy consumption has been transferred to MSMEs. Further, electrolyte formulation (NAL EPSS) for electropolishing of SS needles licensed to M/s Healthium Medtech, which will benefit the masses in government health sector. CSMST Division of NAL continued the dissemination of 1 kW wind solar hybrid (WISH) systems to S & T institutions in and around Bengaluru and demonstration of 10 kW systems. About 8700 units of energy generated from the 10kW system was fed to 66 kVA Sub-station, Kodihalli Campus, CSIR-NAL catering to the lighting loads at the sub-station.

The significant achievement of the laboratory was a successful licensing of nine NAL technologies to twelve industries both large Industries & MSMEs with a total license fee of about Rs.11.25 crore, is the highest Transfer of Technologies (ToT) achieved amongst CSIR laboratories. The major ToT include during year 2019 include Aerospace Autoclave to UCE, Mumbai, DRISHTI runway visibility system to CEL, Ghaziabad.  I am happy to share that NAL’s ToT partner for Multi Zone Hot Bonder (MZHB) has received export order from EASA, Kenya. One of the major ToT of the year ended with successful initiation of collaborative project with BARC on setting-up 25 TPA carbon fibre plant for producing carbon fibres at BARC. I also wish that the NAL’s external cash flow for the financial year 2018-19 was Rs.69 crore which is nearly 32% of the CSIR grant, a great effort by the laboratory to meet part of its expenditure from external earnings.

Dear Colleagues, the year ahead will bring its own challenges but I’m sure by working together, keeping focus on our priorities we can realise our ambitions